Yet another MySQL DMR (5.7.2) is out and here is a short update on the testing improvements in this release.
Posted by anitha at 1:48 AM No comments:

We had an absolutely rocking July this year when we inducted new college graduates (NCGs) into the MySQL team at Oracle, Bangalore.

There were fun themes and games that went hand-in-hand with the training program bringing about a vibrant atmosphere that gave the NCGs a chance to prove that they are indeed a great addition to this high energy MySQL team here in Bangalore :).

The fun part of the induction spanned five Tuesdays and culminated with the grand finale in which we were bowled over by some brilliant performances by the NCGs. What I loved about these Tuesdays was that it jump started the induction programme bringing about some great team building and a very informal introduction to our MySQL team.

On the first Tuesday, the NCGs who were expecting a conventional welcome party were in for a surprise as they were asked to put up an impromptu talent show. After the initial inhibitions and reluctance, they came out with an entertaining show that included rounds of songs, dances, an artistic sketch and even enactment of scenes from Bollywood movies. We also had a dress code: wrap-around skirts for women and shorts for the men. While some folks shied away from the dress code, many enthusiastic members including MySQL India Director, Sanjay, came dressed for the occasion.

The remaining Tuesdays made for very interesting dress themes such as color-coordinated theme, masquerade party, and scarf/hat for women and tie/cap for men. The MySQL team was split into six groups, each comprising of an equal number of new recruits and existing members that were pitted against each other. We played games like "Whose Line Is It Anyway," "Human Knot," "Guess Who," and more. This brought in some good natured rivalry and competition between the teams that served as a great ice-breaker. 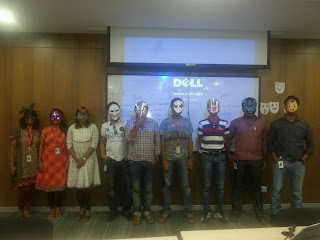 The final Tuesday was marked by an Indian traditional attire theme that was accompanied by a pizza party and a super show by the NCGs as they gyrated to a medley of Bollywood songs. 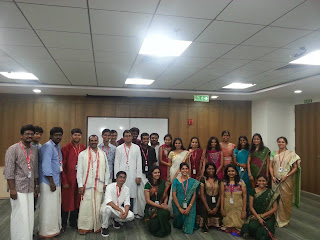 Apart from the fun side, the NCGs also went through the MySQL training boot camp where they were trained on the product, tools and everything else required for excelling in MySQL. Some of the topics covered were MySQL overview, introduction to different modules in MySQL server, storage engines, connectors, test tools like MySQL-Test-Run and Random Query Generator, Configuration Management Tool - Bazaar, MySQL processes, open source etiquette, and more. Trainings were supported by an assignment to ensure that all the concepts were well understood. They were also given some projects that helped them brush up some of the skills most required for the job at MySQL.

It's been two months since the induction is over, but the fun and learning never ends at MySQL :). I think that it's an amazing opportunity to start a career in software engineering with such an awesome product and a wonderful team like the one we have here at Bangalore.

Signing off by wishing all the new recruits a long and bright future with MySQL!

As always, do post your comments, thoughts, recollections...I'd love to hear from you :)

The views expressed on this blog are my own and do not necessarily reflect the views of Oracle.